I have this Taro Puff obsession these past few days.  It is one of the dim sum that is somewhat allowed because it is wheat-free but not really healthy because it is deep-fried.  I love the one at Luk Yuen, almost tastes like the Taro Puff in Hong Kong.

I went to Luk Yuen, Glorietta last Sunday but as soon as I told the server that I would like one order of Taro Puff, she said, they ran out of stock!!! Goodness! I was thinking .... where to go... where to go that I will not get wet because it was raining quite hard.  I parked my car in the basement of Glorietta.

Then I remembered there is  Le Ching in Trinoma!  All I needed to do was ride the MRT.  When I got there, I was placing my order when the cashier said the man before me just got the last order of Taro Puff!!! What?!?!?!  I was going crazy already.  I saw a security guard and asked if there was a David's Teahouse in the area.

Yes, at the garden wing.  I had to wait for a while and when it arrived, the serving was just 2 pieces!!!!  And I think they used margarine with the mashed taro.  I did not give up, I crossed to SM North, there is a bridgeway, you will not get wet and looked for a dim sum place. But the list of restaurants I have on my phone was not accurate, they all closed down already.  I thought... ok I know in Araneta Center there is a branch of Gloria Maris.

As I was about to exit The Block, I saw Gloria Maris!  I immediately asked if they have Taro puff and the waiter said yes!  It was OK but it was not the taste I was looking for.

So this morning, when I went out of my room, I saw that it was a bit sunny! I immediately called up Jing and asked her if she wanted to accompany me to Golden Bay Seafood Restaurant on Macapagal Ave. 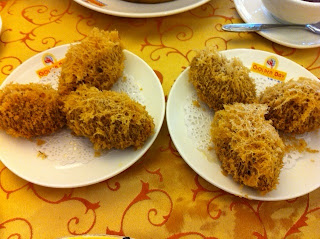 I told Jing to order her own because I had no plans of sharing it with her.

We also got 2 orders of Chicken feet. 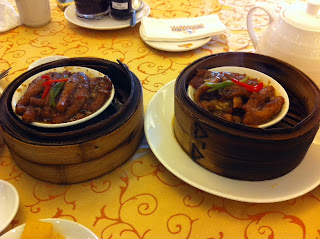 I had the Shrimp Sio Mai.  I forgot to remove the wrapper!!! I am now suffering from a mild headache, one of the consequences of consuming wheat even in small amounts. 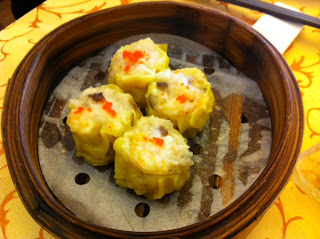 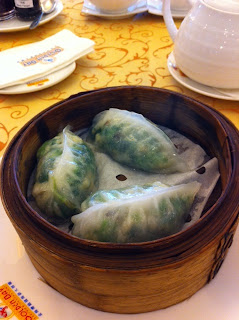 We shared an order of Congee with Century Egg and Shredded Pork. 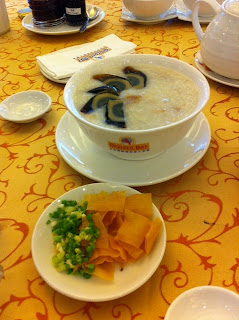 OK .... I know I should not have cravings in the Wheat-free diet but at least what I am craving for is not made of wheat!