Near Mishaps In Boracay

Whenever I am about to travel, I always say this prayer....

"Dear God, Please, let me have a fun, sick-free and safe vacation."

Boracay is my happy place. 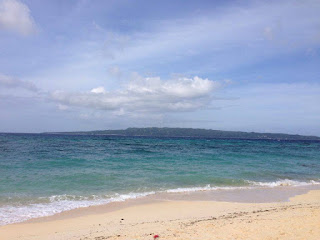 Everybody knows it.  No need to explain.  Even I do not know why I love it so much, enough to endure delayed or cancelled flights.

It is also a dangerous place because you are out there at the whims of Mother Nature.

I had a few near mishaps on this trip.

I wanted to ride the speedboat instead of the pumpboat so I told Pinky and Mona that I would meet them at Cagban port.

Unfortunately, the speedboat was not leaving yet.  I did not want my friends to wait for me so I decided to ride the pumpboat.

There were 2 pumpboats at the port.  One was getting filled up fast.  I wanted to ride the other one but the boatman said I had to ride the one with passengers already.

I should have listened to my instincts.  I can sometimes sense or feel something is about to happen.

But... since I was in a hurry to cross the channel, I started to board the boat. 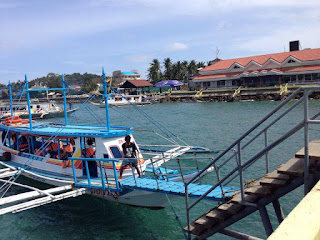 I took a step or 2 when suddenly there was a gust of wind and the plank tilted sideways to the left!

I screamed and screamed and the boatmen were panicking because it seemed like the wooden plank was about to throw me off into the water!  I could swim to save my life but there were BIG rocks and corals at the pier. And it was also deep.

To compound the problem, I was wearing my t-shirt that I "cropped" in Legazpi.  Remember that shirt???  I could only hold onto the rail with one hand because the other hand was holding on to the hem of my shirt.  It was very windy and I did not want to flash everybody at the port!

The boatmen then held onto the plank so I could cross but when I was near the boat already, another huge wave hit it and the plank was about to get blown away again.

"Ma'am! Malaking hakbang!" from the plank to the boat because the plank was moving away from the boat and I was still on it!

It should have been a scary incident but when I sat down inside and on my way across the channel, I was secretly giggling to myself.  I think, everybody thought I was crazy!!!

It was probably my way of coping with the stressful situation.

It was kind of funny, after the fact.  When I told the Ka Escapades about it, they asked if Pinky videod it!!!

I went to the market early to buy our bread on the 2nd day of our vacation.  I had this idea that I should buy everything at one time so I do not have to go back and forth.  My shopping bags were full and heavy.  I rode the hotel's elevator.  The doors closed and....Kaput! The power went off and the car dropped a little.

I used to have this fear of being trapped inside an elevator but not so scared anymore.  But the fear is still there.

I waited for a while and the doors opened but elevator was still not working.  The staff said I had to take the stairs.

5 flights of stairs with shopping bags full to capacity!

When I got to our room, I told them what happened and we all laughed about it!

On the 3rd day, we all went to Puka Beach. 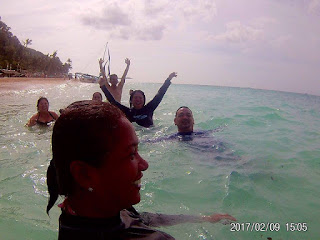 We were having fun in the water. 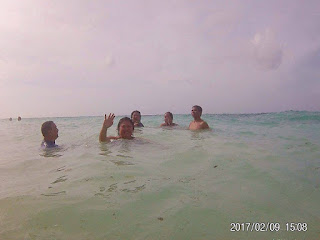 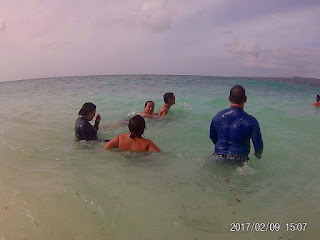 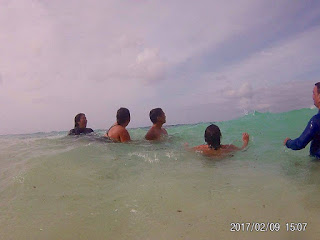 The waves were huge but not strong.... but if you are afraid of the water, you will get scared. 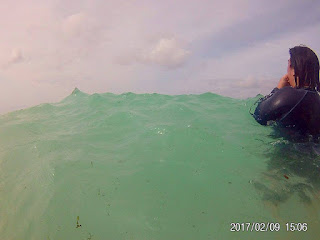 The trick with huge waves is that you just roll along with it. 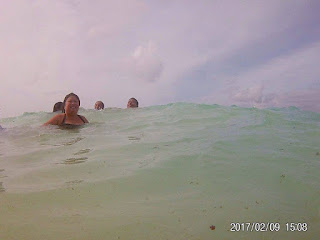 This is what you will see as a huge wave approaches the shore. 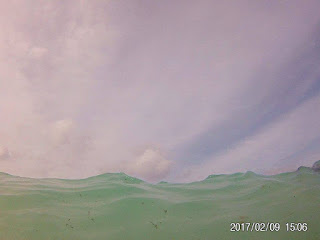 I did not jump high enough to meet the oncoming wave so it took me under.  It was a huge one.

As I was about to get up, another one hit me. 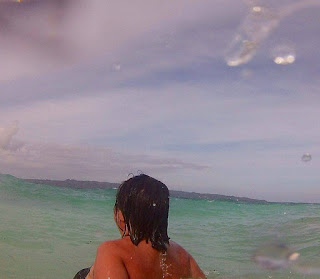 I was struggling to get up when a much bigger wave hit me again and took me under.  I felt my neck hit the sand and my feet went up over my head. 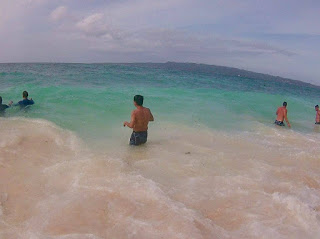 At that point, Bernie and Eric rushed to help me.  The shore was steep and sloping downwards so it was really hard to get up.

I was underneath that churning waves and sand! 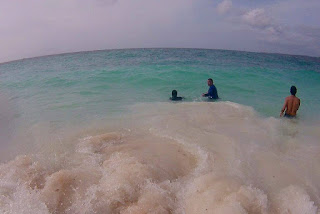 Believe it or not we were all laughing after wards.  Pinky was being hit by the waves as well but she could not get up because she was laughing so hard.

Ohhhh And I had a wardrobe malfunction!  Now, I remember why everybody was laughing so hard.

I "mooned" Mona and the rest of the tourists  But it was okay, they were all strangers!  I have to give credit where credit is due, though.

After all the torture my swimsuit received, my halter top did not come undone!  I bought it at F&F!

My ears, nose, mouth and hair were full of PUKA sand!  Among other body parts. 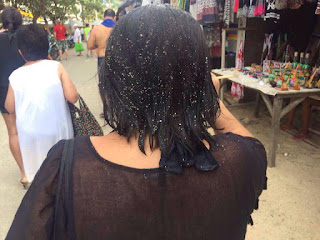 We are not talking about powdery sand, we are talking about crushed puka shells! I already washed up at the outdoor shower of Willy's but the sand/shell still clung to me.  I swam in white beach to get rid of all the sand.  I had to scrub my hair thoroughly under water while swimming.  It took me several times to remove the grit.

I do not think I will swim again at Puka beach.  I got away scot-free but do not want to tempt Mother Nature again.

When I am with my friends I am not afraid.  I do not mean fearless but not afraid in the sense that I know that they will always look out for me.  I feel safe in their company.  I know I am in good hands.

That's how much trust I have in them.

Also, I brought an "ace" with me.  I was not afraid because God is my protector.

I received this holding cross from my friend, Pia last Christmas and I always hold it every night when I pray before I go to bed. 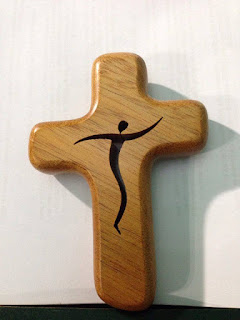 For some reason, I brought it to Boracay with me.

So.... all the incidents were just " near mishaps" because someone great and powerful was looking out for me.

"Thank you, dear God for letting me have a fun, sick-free, sunny and safe vacation."