That was a quote, somewhat, from an article written by Reggie Aspiras about the different degrees of steak doneness.

My favorite "doneness of steak is..... TAPA!

Hahahahaha I am such a Jejemon sometimes when it comes to my taste in food.

Simple and pedestrian. Pang Masa..... And I am not ashamed to admit it!

I bought a piece of Aussie Rib Eye steak in Rustan's, Rockwell. 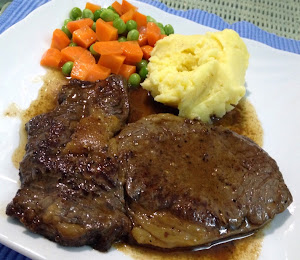 I did not get a thick cut because that would be hard to cook. I chose a piece of steak with lots of marbling.

Simple marinade of cooking oil (I don't like the taste of Olive oil unless I use it for salad dressing.) salt and pepper for 5 minutes.

I seared one side until it resembled Beef Tapa!!!!

Then flipped it over and cooked it till nuclear dark brown.

I let it rest for 5 minutes covered with foil.

Meanwhile, I deglazed the pan with about 2 T. Water and let the sauce reduce. I added 1 T. Butter to thicken the it. I did not use any starch.

It rarely happens but I burned the potatoes I was boiling!!!!

I was distracted by a telephone call. I was able to salvage a few pieces for my mashed potatoes.

I was able to find a chart describing the degrees of steak doneness online. 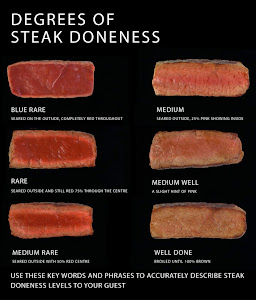 My steak according to the chart is considered medium well.

Well.... That was the thickest part of the steak.

The rest was just the way I like it! 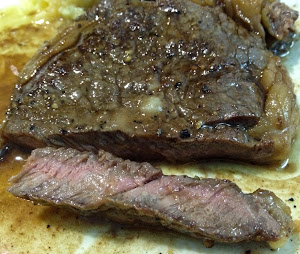 Posted with Blogsy
Posted by Lia's Food Journey at 11:21 PM