Yes! Finally .... Crispy Pata craving ... satisfied.  I've searched for days in the net where to eat the best crispy pata in Manila but I did not find it.  I know the one from Candelaria, Quezon is very good.  But what can I do if I can't find one I like ????  I decided to make my own!!!!! 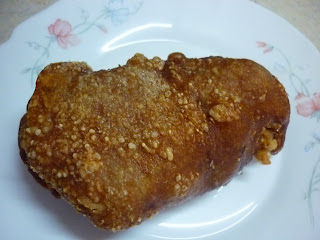 1 kg. Pata - front leg not hind leg, deboned, rolled and tied with a twine (ask the butcher to debone) 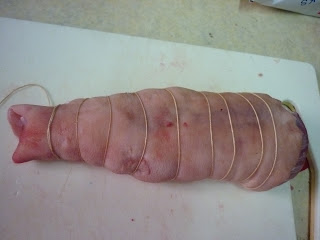 Boil the pata until the scum rises to the top.  Discard water and rinse the pata.  Cover with water, add the salt and let the water boil.  Lower the heat and boil for an hour and a half or if using pressure cooker, 45 minutes only. 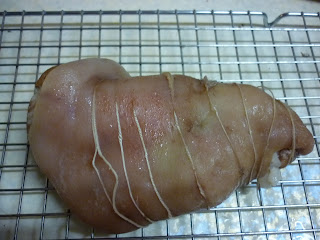 Remove the twine and wrap the pata in plastic.  Freeze.

Heat 4 cups of oil in a deep pot with sturdy cover.  Lower the FROZEN pata slowly into the hot oil.  Be careful the oil will rise to the top and it will splatter, worst case scenario, oil will overflow.  I usually turn off the heat at this point.  Cover immediately.

Turn back heat on over low setting.  Fry for 15 minutes then turn up the heat for about 5 minutes.

Turn off heat again and slowly turn over the pata, cover and continue frying over high heat until the skin is blistered and crisp.

Remove cover - last 5 minutes of frying.  At this point, oil will not splatter anymore. 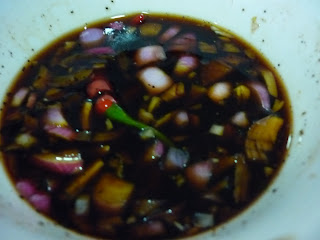 MMMMmmmm  if you could just hear me eat the skin of the Crispy Pata!!! 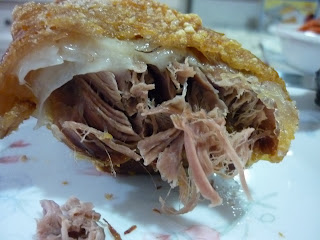 Maybe I should add sounds to this blog.  The skin was really crisp and easy to bite unlike some Crispy Pata I have eaten, Yes, the skin was crisp but the it was hard to bite.  Because ... they did not tenderize the meat well.

I cooked Ginataang Sitaw with Shrimps, a perfect partner for the sinful pata. 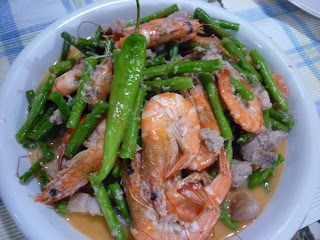 It would be nice to boil the pata, then just keep in the freezer.  When there are surprise guests, just fry it and in less than 30 minutes, VOILA!
Posted by Lia's Food Journey at 2:06 PM