Mayon is tempestuous in nature. 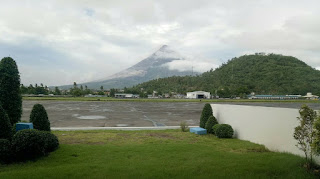 It may appear serene and calm most of the time but when the volcano erupts, it shows how violent and volatile it could be.

Whichever persona it chooses to show, undeniably, it is still beautiful and magnificent.

I was just in Legazpi a few days ago.

The night before I left, the alert level was raised to Level 3 because the tip of the mountain was already glowing.


I called Cebu Pacific to ask if my flight is going to be cancelled. They replied that the flight is not cancelled despite the fact that Mayon could erupt anytime soon according to Philvocs.

I was hesitant to leave the next day but I asked people I know in Legazpi if it was ok to go there.

They were not worried about the situation so I took the 10:55 am flight.  I know it was just a fast flight, not even an hour.  I always close my eyes when I am up in the air because I get dizzy if I look out of the window.

I already heard the wheels dropping down, getting ready to land then suddenly, instead of the plane descending, I heard and felt it accelerate and ascend!

The pilot annouced that he could not land the plane because of poor visibility and bad weather conditions.  He said that he would try to land again.

I looked out the window and all I could see was white smoke, not even white clouds.  No wonder the pilot could not see anything.

Only to find out later on in the news that the mountain spewed ashes again so visibility was almost nil.

It was a little scary. I tightened my seat belt, which I rarely do, and prepared myself for a hard landing. I even prayed!  I know it was difficult for the pilot because we could all "feel" him trying to maneuver and land the aircraft.

The passengers clapped their hands upon touchdown.

Janet, the sister of Sherman, picked me up from the airport.  We had lunch in their house in Daraga.  She even cooked crabs for me and bought other food. 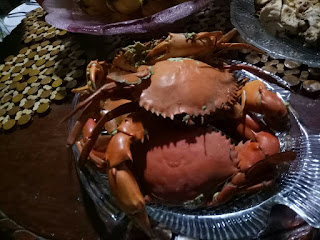 I was in Legazpi to take care of some business matters.  I really did not want to go but I had to.

Sia and I checked in at Hotel St. Ellis. 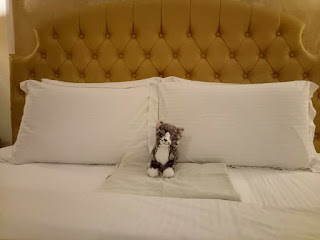 It was her first time in Legazpi City.

It is near the center. 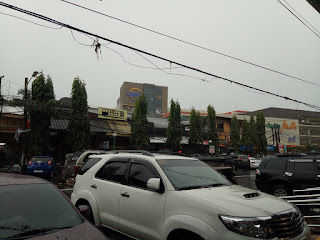 When I say city center, it means it is near the Ayala Malls and LCC.

I had my favorite ice cream at 1st Colonial Grill in Ayala Malls. 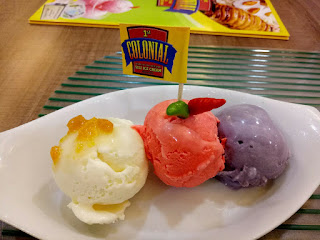 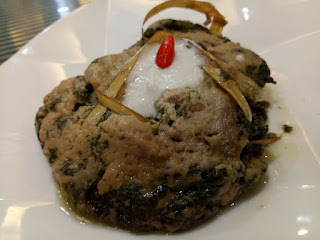 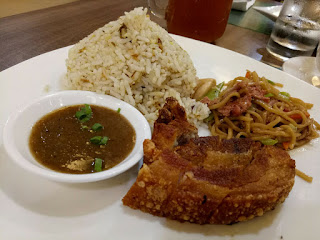 Hotel St. Ellis is known for their Pili Cheesecake. 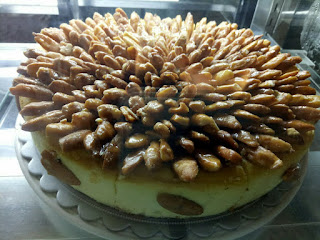 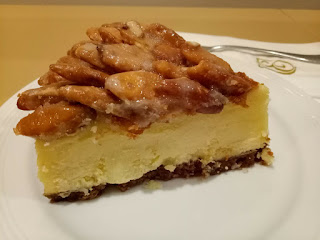 I was so glad it was available because in my previous visits, there was no delivery.

Ate asked me to bring home a couple of slices!

On my first night in Legazpi I was not aware that lava flowed from the top of the volcano.

But the following morning, Mayon looked peaceful on our side of the mountain. 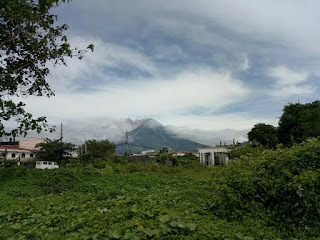 The danger zone was in the Camalig and Guinobatan area.

I had lunch at Waway's and ate my favorite Bicol Express. 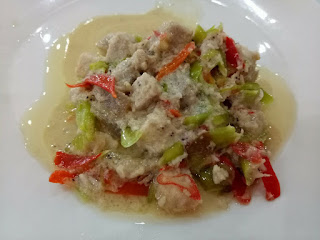 The sauce is so creamy!  I've always wondered why my version always looks beigey and sometimes brownish.

My cousin said it is because of the alamang they use.

I bought 2 K. white bagoong from the Legazpi Public Market 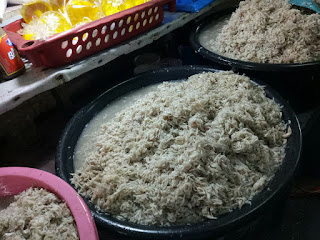 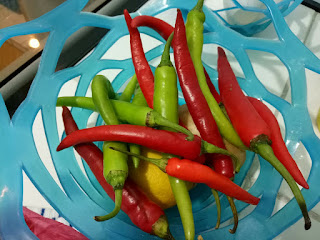 I experimented with Bicol Express when I got home and..... 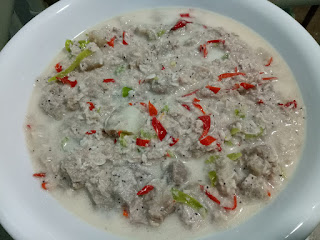 Best eaten with Seafood (fish or shrimp) Sinigang according to my cousin.  Tita Malyne even gave me tips on how to cook food with gata.

I checked out other old familiar eating places. 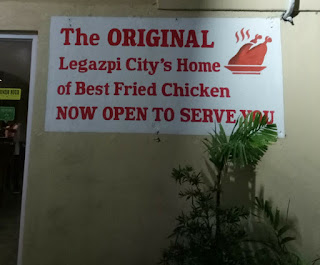 Back in the days when there was no Max's yet in Legazpi. 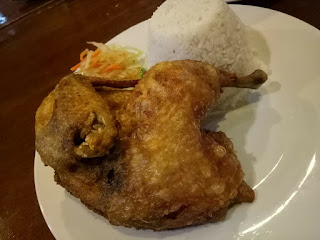 Graceland was very popular when it was the only fast food restaurant.  Before Jollibee and McDonalds came to town. 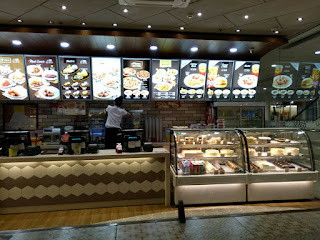 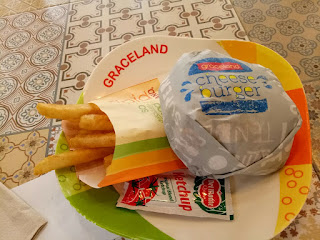 On my last day, I happen to chance upon a small church, St. Jude. 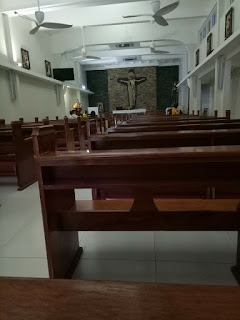 I was so surprised it was airconditioned for such a small church.  I was impressed! 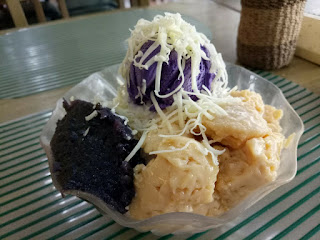 At first, I thought it only had leche flan, ube halaya, ube ice cream and grated cheese but after mixing it, I saw whole corn kermels, minatamis na langka and small sago.

Then it was time to head back to Manila!!!  I wanted to go home already!  I have concluded my business and I could not wait to leave.  I was afraid the volcano will erupt!

The flight was just delayed by 55 minutes.  No big deal.  I am ok with delays as long as they do not cancel.

Hihihi  I told my friends that my bag was so "busog". 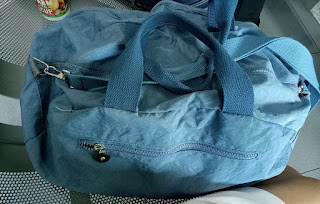 They got confused and asked,  "YOU are busog or your bag???"

My bag is not big but it is not a purse.  One might say it is an overnight bag of sorts.

I have a small pouch which contains my shawl and a small pillow for the back. 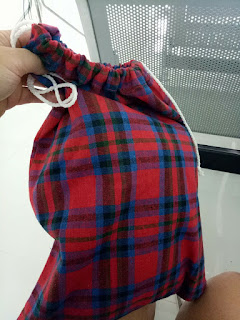 Ohhh! I just discovered something!  My back does not hurt when I use the pillow because when there is a pillow for my lower back, it pushes me a bit forward on my seat and then my feet could touch the floor!

I put my Ate's Pili Cheesecake in my bag, as well. 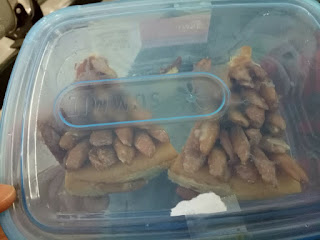 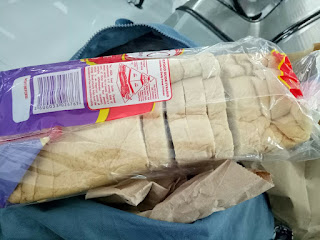 My friends thought I was kidding when I said I bought tasty bread!  I was not!  It is so good because it is very sweet and soft to the point that it will stick to the roof of your mouth!!!

I even made chicken sandwich spread and menudo to eat with the bread!

FC - I have to remember this brand.  I bought it in LCC. 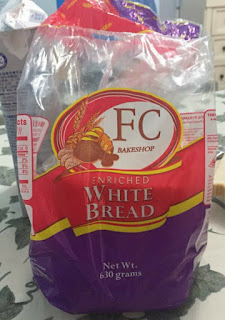 Next time I go back there I will buy several loaves of bread.

My cousin gave me Macaroni Salad for me to take home to Manila. 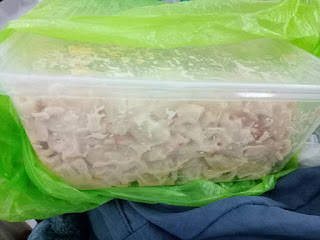 I had to buy plastic containers for the bagoong. 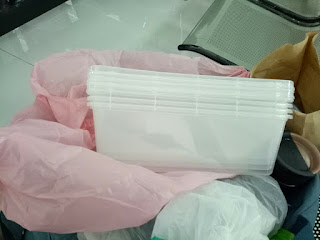 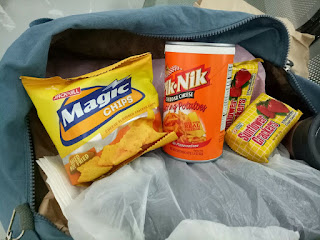 The other snacks were in the luggage.  I find it so time consuming to eat Pik-Nik! I do not know why Ate and Lisa love it.  I ended up "drinking" Pik-Nik from the carton while I was in the boarding area of the airport. 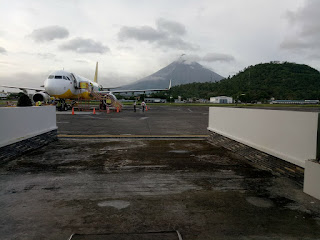 It looked so calm and serene again as I was leaving Legazpi City.

Snowball was disappointed because there was no pasalubong for her in my luggage.