Do you know it took me years and years before perfecting the Pork Menudo recipe of Mariger!?!? 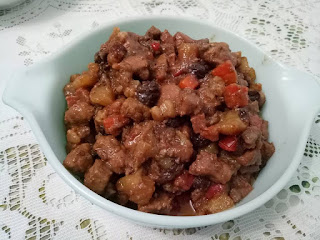 But here it is! I better post it now before I forget the ingredients and proportions.

This is a dry menudo. It does not have sauce. Perfect with the white "tasty" bread, the kind that sticks to the roof of your mouth!

It is dry so it does not drip when you eat it with bread. 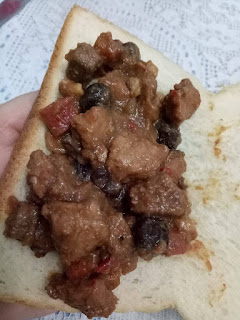 Marinate the pork in soy sauce, calamansi, salt, pepper and Ajinamoto overnight.
Put 1/4 t. salt on the fat. Fry in a non stick pan until oil has been rendered. 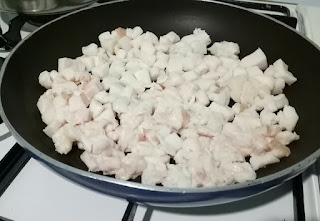 Set aside the bits of fat. 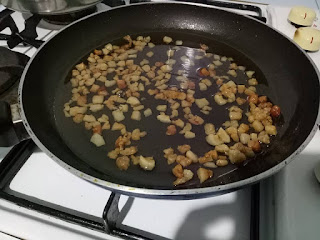 Fry the potatoes in pork lard. Set Aside.
Saute the garlic and onions in pork lard until soft.
Drain the meat and reserve the marinade.
Add the meat to the sauteed garlic and onions.  Cook until the liquid evaporates and you see some oil in the pan.
Add the liver and carrots.
Continue sauteing until the liver is not bloody anymore.
Add the marinade.
Let it boil then add the water.  When it is boiling, add the rest of the ingredients except the Reno.
Lower the heat and simmer until the sauce has been reduced by half.  Add the Reno and continue simmering until it is dry.  Season with patis.

"Mariger? Is this considered dry enough?" 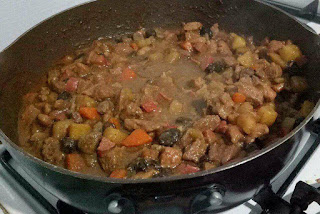 She replied, "No, simmer until there is no more sauce."

Best served the next day with steamed white rice or white tasty bread.