I don't remember the last time I made apple pie, probably more than 5 years ago. Last week, Tita Portia asked me to bake the Sara Lee Peach Pie she bought from Rustan's. Since then I've been planning to make apple pie. Mona wanted to learn how flute the edges of the pie so we practiced this afternoon. Hmmm .... didn't turn out picture perfect though.

My favorite cookbook was my Grandma's, published in 1955 by Edith Barber. I like the old fashioned way of cooking and baking so I consider this book my bible. I even got the base recipe of my cream puff from it. Can you imagine, it is older than me!!!! 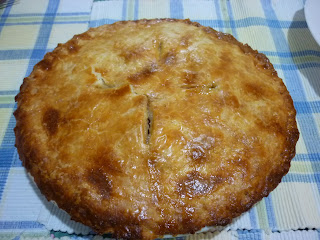 Standard Two Crust Pastry
2 1/2 C. sifted flour
1 t. salt
3/4 C. cold Queensland butter, cut into small cubes
5 T. ice cold water
Mix and sift flour and salt. Using two knives or pastry blender, cut the butter into the flour until it resembles small peas or corn meal. Add 1 T. cold water a tablespoon at a time. Mix with a fork, knead lightly, do not over handle the dough or else it won't be flaky. Divide the dough into two, wrap with cling film and chill for at least 30 minutes.

Put the chilled dough in between 2 pieces of wax paper. Roll out 2 inches larger than your pie pan and line the pie pan with the pastry.

Apple Pie Filling
1 C. Sugar
1 T. flour
1/4 t. salt
1 t. cinnamon
1 T. butter
5 - 6 green apples, pared, cored and sliced thinly (One apple at a time to prevent browning.)
Mix in a bowl the sugar, salt, flour and cinnamon. Layer the apple, one apple = one layer, sprinkle 2-3 T. of the sugar cinnamon mixture for every layer. (I forgot to add cinnamon that is why the sugar mixture is white.) But it still tasted good, just the same. 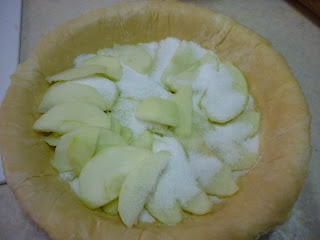 Before covering the pie with the 2nd rolled out dough, dot with butter. 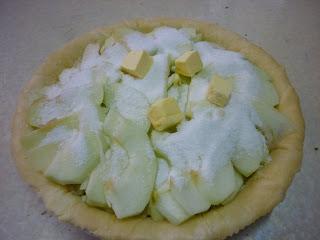 Brush the top crust with egg wash and put 4 slits in the middle to let the steam escape during baking.
Bake at 425 F for 30 to 40 minutes. Cool 1-2 hours before slicing. 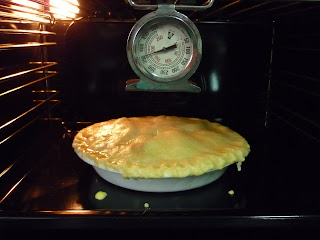 Serve with vanilla ice cream on the side. 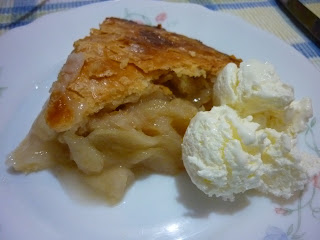 We rolled the left over dough, brushed with the remaining egg wash and cut into strips for Wriggly!!!! 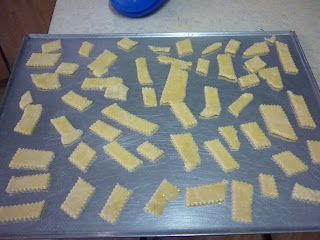 But when it came out of the oven, it tasted so good... flaky and buttery. Mona said, maybe we should just eat it and not give Wriggly, I said, NO! That's for my baby! But who said we can't have a few?!?!?! 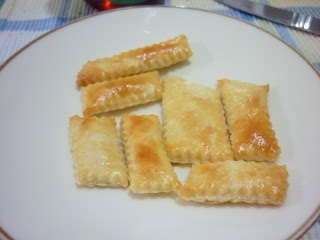 Hehehehe so we pilfered a few from Wriggly and got the guava jelly from the fridge. 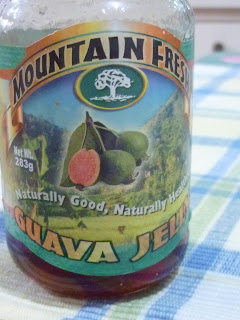 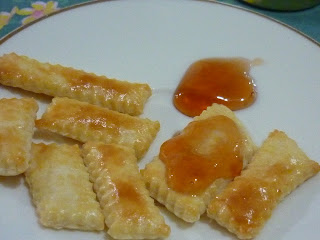