My favorite comfort food is Sinigang na Baboy. It is something I can eat everyday but only the one I make... not from the restaurants. The other day I experimented and sauted garlic, onions and tomatoes. It was just okay but the ultimate sinigang for me is the one Mariger taught me how to cook 20 years ago.

My sister, Renee, used to request that I cook that often when she was still here in the Philippines. My mom hated it when I'm in my sinigang obsession because we would have it almost everyday!!! And I like mine really sour hahahaha I remember Mom would say: Lia!!!! Didn't you taste the soup before serving it???? hahahaha It was so sour because I used real tamarind AND Knorr Sinigang Mix - Original. I don't like the Knorr Sinigang cube or the other Knorr sinigang variants. I'm not even a fan of gabi.
I like to buy my liempo fresh from the market... not from the supermarket because that has been frozen already. I boil the meat until the skin of the liempo is almost gelatinous!!! I don't know why there is a difference in taste... and also the meat from the market when cooked is milky white in color while the one from the supermarket is brownish beige.
OH! NO!!!!! I want to eat sinigang again! But I've just had that last Wednesday, Tuesday and Friday!
When I was in HS, I remember my classmate Jopet, mashing the green chili of the sinigang in her patis and calamansi... and since then... for me ... there is no other way to eat sinigang.

Hahahaha How many "sinigang" word can you find in this post? Does it tell you now how much I love that dish? 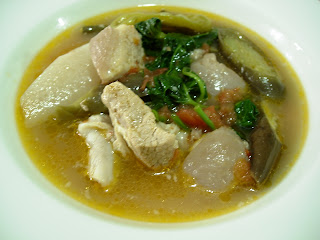 Kangkong leaves only, do not include the stalk

Boil meat until tender. Do not add salt or pepper. Strain and save broth. Squeeze the whole tomatoes into the pot using your hand and saute until mushy. Add the eggplant and the radish and a little of the broth... then add the sitaw, boiled pork and the rest of the broth. Season with patis and sinigang mix. Simmer for a few minutes. When you add the Kangkong leaves, cook it covered for EXACTLY one minute only. NO more no less. Then lift and remove the cover.

I like my vegetables tender crisps and not overdone. Sometimes, if you leave the vegetables covered too long sitting in the pot, they turn into ugly fatigue green ... and you wil have a hard time swallowing it especially the leafy vegetables.

This is the sinagang I cooked with garlic, onions and tomatoes. The kangkong leaves are dark green in color and butter soft but not mushy. 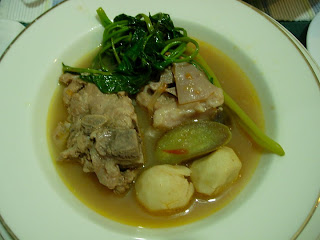